Your handshake can reveal much about your personality

Which of the following more closely resembles your handshake style?

Conveys confidence, assertiveness and professionalism. The person using this handshake is neither shy nor neurotic and is generally perceived to be trustworthy and willing to listen. A firm handshake provides the opportunity for a favorable first impression, it suggests a person who is knowledgeable and possesses excellent social skills. There are instances where stereotypes elicit a negative evaluation, such as when women's behavior is similar to men's. In the case of a firm handshake however, a woman is always seen as being confident and decisive.

Most likely an open and outgoing person who has the habit of being warm and pleasant to everybody. An overly eager handshake shows power, determination and the desire to remain in control of situations. If exaggerated, the handshake can make people appear inflexible and it can also reveal insecurity, a person who doesn't know when to quit.

3. The knuckle cruncher (AKA bone crusher)

The knuckle cruncher usually wants to express a message of power and intimidation. For those people who want to cover up their feelings of insecurity this handshake may be used to keep others at a distance. When faced with this handshake do not appear submissive. It may serve your purpose however, to be accommodating and regardful of these people. There are also cases where the person is being sincere. However while the intention may be to convey warmth, the impression created is definitely that of a person who is high strung and lacks sensitivity. Regardless of the intentions involved, people will remember this handshake and draw lasting impressions.

4. The lingering handshake (AKA the prison handshake)

Sometimes people keep your hand in their hand for too long and seem to not want to give it back. This may denote reliability and trustworthiness or it may suggest that the person hasn't revealed all of his/her cards. It may also mean that the person is expecting something more that what was agreed upon. Therefore, in order to interpret this handshake, it would be necessary to go with instinct, or examine other body language as well. Interestingly, in the case of a lingering handshake, few people try to pull their hand away. It seems that the act of being physically connected causes their boldness to fade.

5. Light and brief finger-tip grips (AKA the limp or dead fish hand shaker)

Someone who is not interested in building rapport and wants to escape the greeting ritual as soon as possible. This person is perceived to be passive and reserved, without the interest and energy required to complete people focused tasks. This type of handshake indicates a lackluster personality and usually draws a lasting impression. If however, the handshake is done with a direct look into the other person's eyes, it can indicate the potential for further development.

6. Use both hands (AKA hand sandwich or the politician's handshake or used car salesman shake)

A result of an eagerness to convey a message. This is the favorite handshake of politicians because it implies a quick sincerity and intimacy. It is open to interpretation whether the person is trying to sell something that's not really there, or is someone who is genuine and agreeable. If it is decided that the person is hoping to secure a favor, note that the higher the other hand (from the wrist to the neck), the greater the manipulation and control.

Normal looking handshake, however your hand will be cupped much like a teacup, and there will be no palm to palm contact. This handshake may indicate that the person is hiding something, or is shy.

This person will only react to the other party's first move. In a case such as this, the person may be objecting to a situation, however if this behavior is consistent, the person may be hesitant and reserved by nature. Cultural norms dictate that the older person or the person with the highest stature should initiate a handshake. If you have roughly the same age and position with the other person then offering a handshake is a way of portraying yourself as a confident person.

9. Pat the other person's arm or shoulder while engaged in a handshake

May reveal a sense of superiority. Depending on the person's social position this handshake can be a sincere effort to show understanding or it can be an attempt to belittle someone. This type of handshake is sometimes used between friends of long standing and consequently can portray false sincerity when the relationship is more superficial. Depending on the vibes that you receive, be mindful and aware, especially in situations where you need to place your trust.

10. The stiff-arm thrust (AKA next-to-the-body handshake)

Keeping the arm close to the body while bending it at the elbow, this handshake is used by people who do not want to take risks. It can also act as a defense mechanism for people who feel a threat to their territory, and tends to be used by aggressive people who want to keep others at a distance. 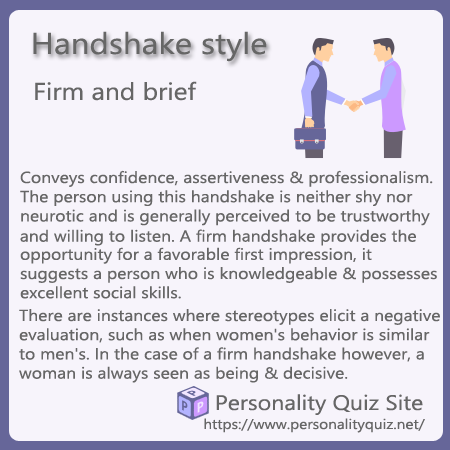 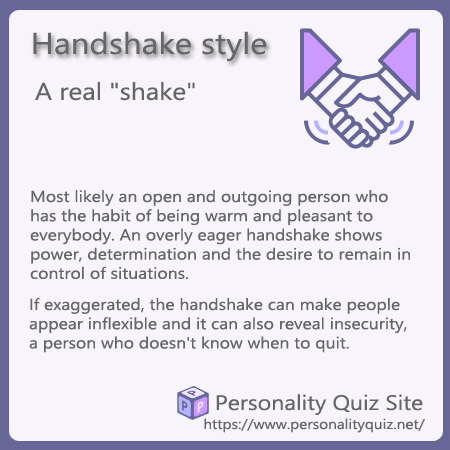 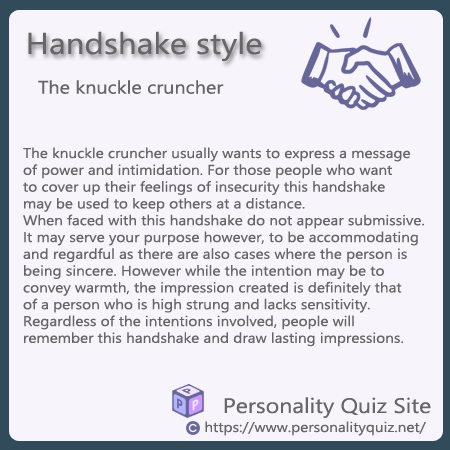 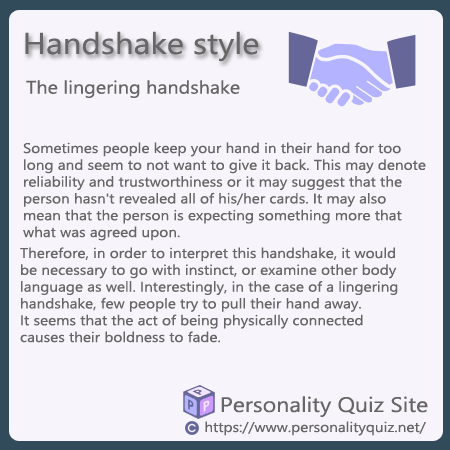 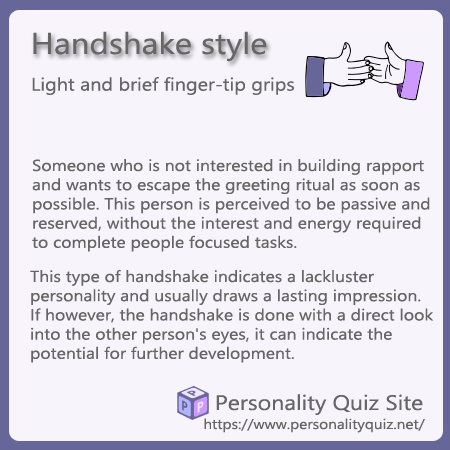 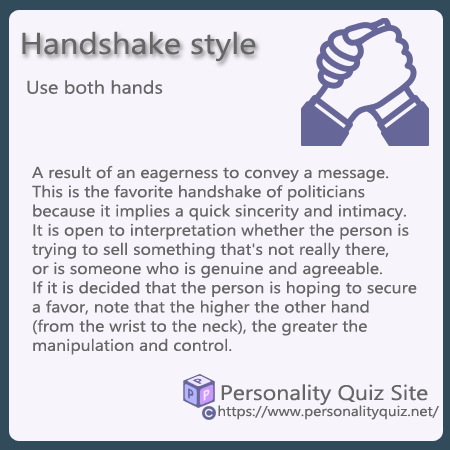 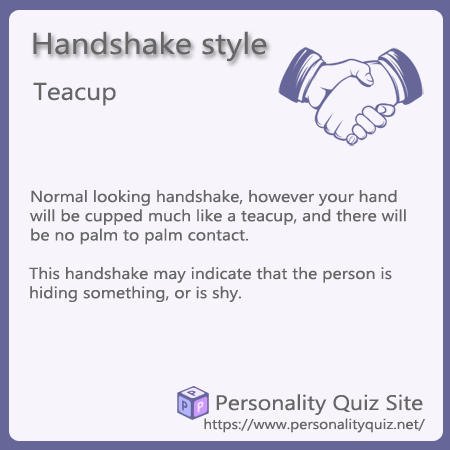 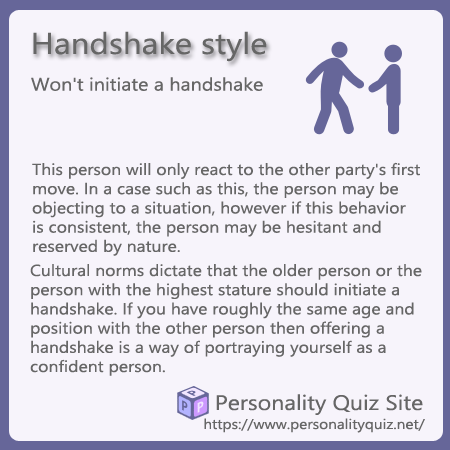 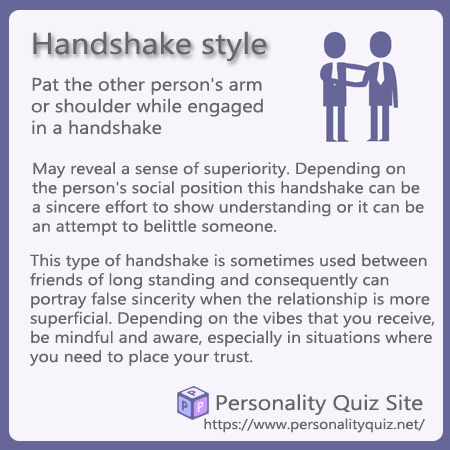 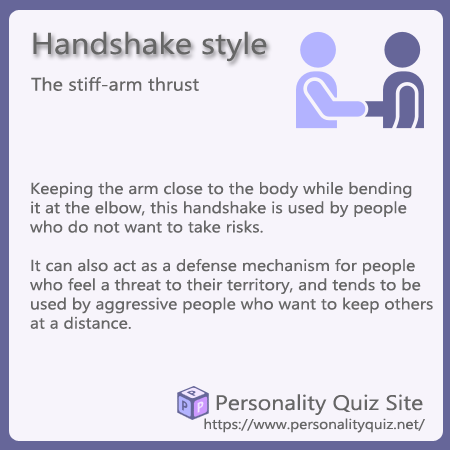 How accurate were your results? Join in the discussion.

{"commentics_url":"\/\/www.personalityquiz.net\/comsys\/","page_id":95,"enabled_country":false,"country_id":0,"enabled_state":false,"state_id":0,"enabled_upload":false,"maximum_upload_amount":3,"maximum_upload_size":5,"maximum_upload_total":5,"securimage":false,"securimage_url":"\/\/www.personalityquiz.net\/comsys\/3rdparty\/securimage\/securimage_show.php?namespace=cmtx_95","cmtx_wait_for_comment":"cmtx_wait_for_comment","lang_error_file_num":"A maximum of %d files are allowed to be uploaded","lang_error_file_size":"Please upload files no bigger than %d MB in size","lang_error_file_total":"The total size of all files must be less than %d MB","lang_error_file_type":"Only image file types are allowed to be uploaded","lang_text_loading":"Loading ..","lang_placeholder_country":"Country","lang_placeholder_state":"State","lang_text_country_first":"Please select a country first","lang_button_submit":"Add Comment","lang_button_preview":"Preview","lang_button_remove":"Remove","lang_button_processing":"Please Wait.."}

May be useful stuff.